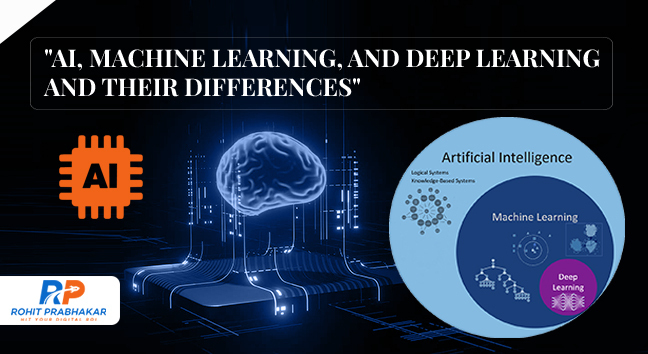 Artificial intelligence, machine learning, and deep learning are all phrases that are often muddled, so let’s start with basic definitions.

AI refers to the ability of a computer to imitate human behavior in some way.

Machine learning is a subfield of AI that includes techniques that allow computers to deduce meaning from data and deliver AI applications.

Those are accurate descriptions; however they are a little brief. So we’ll go through each of these topics in more detail and provide some context.

What Is Artificial Intelligence?

Artificial intelligence as a field of study was established in 1956 to help innovation in business strategy. The goal then, as now, was to get computers to perform tasks regarded as uniquely human: things that required intelligence. Initially, researchers worked on problems like playing checkers and solving logic problems.

You could discern some type of “artificial intelligence” behind such moves if you looked at the output of one of those checkers-playing computers, especially when the machine beat you. Early triumphs instilled in the early researchers an almost limitless enthusiasm for AI’s potential, matched only by their miscalculations about how difficult some tasks were.

The phrase AI says nothing about how those issues are addressed. There are numerous strategies available, including rule-based and expert systems. In the 1980s, one type of technology became increasingly popular: machine learning.

What Is Machine Learning and How Does It Work?

Some problems were simply not susceptible to the early AI methodologies, which is why those early researchers considered them to be far more difficult. Hard-coded algorithms or rigid, rule-based systems simply didn’t cut it for jobs like image recognition or extracting meaning from text.

The answer turns out to be not merely replicating human behavior (AI), but also mimicking human learning.

Consider how you first learnt to read. Before picking up your first book, you didn’t sit down and master spelling and grammar. You start with simple books and work your way up to more difficult ones. Reading truly taught you the rules (and exceptions) of spelling and grammar. To put it another way, you analysed and learned from a large amount of data.

That is exactly how machine learning works. Feed a lot of data to an algorithm (rather than your brain) and let it figure things out. Give an algorithm a lot of financial transaction data, tell it which ones are fraudulent, and let it figure out what signals fraud so it can anticipate future fraud. Alternatively, provide it information about your consumer base and let it work out how to segment them most effectively. Learn more about machine learning techniques by clicking here.

These algorithms may solve a variety of issues as they evolved. However, several tasks that humans considered simple (such as speech or handwriting detection) were difficult for machines. Why not go all the way and try to copy the human brain if machine learning is about mimicking how humans learn? Neural networks work on this principle.

Artificial neurons (neurons coupled by synapses are the major components of your brain) had been discussed for some time. And software-simulated neural networks began to be applied for specific challenges. They showed great potential and were able to solve certain difficult tasks that other algorithms couldn’t.

Machine learning, on the other hand, got stuck on a lot of things that elementary school kids had no trouble with: how many dogs are in this picture, or are they really wolves? Bring me the ripe banana from over there. What made this literary character cry so much?

What does Deep Learning entail?

Deep learning, to put it simply, is the use of neural networks with more neurons, layers, and interconnection helping in innovation in business strategy. We’re still a long way from replicating the human brain in all of its complexities, but we’re getting closer.

And when you read about improvements in computing, from self-driving vehicles to Go-playing supercomputers to speech recognition, you’re reading about deep learning. You’ve had some sort of artificial intelligence experience. Behind the scenes, deep learning is used to power that AI.

Let’s look at a few examples to show how deep learning differs from simpler neural networks and other machine learning techniques.

The Process of Deep Learning

Even if you’ve never seen a horse image before, you’ll identify it as one. It doesn’t matter if the horse is on a sofa or dressed up as a hippo for Halloween. You can identify a horse because you are familiar with the different characteristics that distinguish it, such as the form of its muzzle, the number and placement of its legs, and so on.

Deep learning is capable of accomplishing this. It’s crucial for a variety of things, including driverless vehicles. Before an automobile can decide what to do next, it must first understand its surroundings. It must distinguish people, bicycles, other vehicles, road signs, and other objects. And do so under difficult optical conditions. That is impossible with current machine learning approaches.

Hopefully, the initial definition at the start of the article now makes more sense. Artificial intelligence (AI) refers to machines that mimic human intelligence in some way. There are several AI techniques, but machine learning is one of them. Machine learning helps algorithms to learn from data. Finally, deep learning is a subclass of machine learning that use multi-layered neural networks to answer the most difficult problems (for computers).