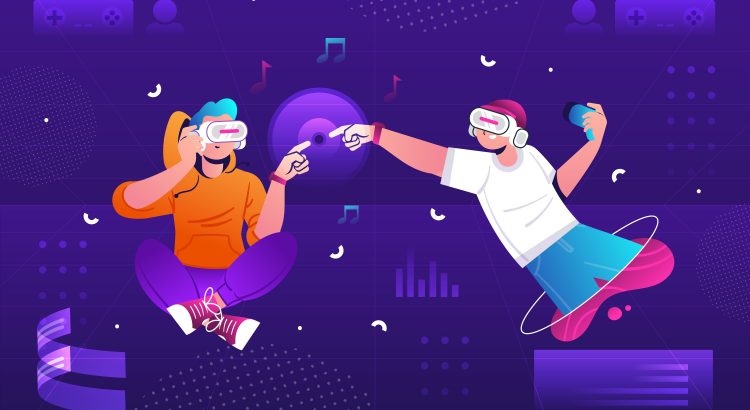 The computing world is full of jargon and buzzwords, one of which has lately made headlines is ‘Metaverse.’ The word has piqued the curiosity of practically everyone on the earth, from IT giants and venture capitalists to ordinary people like you and me.

At what looks to be a chapter of a classic science fiction novel, we have arrived in the metaverse, one of the consequences of technological advancement. Years of invention and research have resulted in the rise of more virtual worlds, which may be accessed via crypto currencies or non-fungible tokens (NFTs), social media, and augmented reality apps. These, along with other technical and digital breakthroughs, have contributed to the virtual world’s growth and expansion.

The metaverse, which is still in its early stages of development, is an all-encompassing virtual world that includes games like Fortnite, Minecraft, and Roblox, contemporary technology and mobile internet, and marketing and commerce.

The Metaverse is alive and making some progress!

Let’s start with the hype. In 2021, the term “metaverse” became popular, particularly when Facebook (now Meta) declared a significant corporation strategy of constructing 3D social worlds linked to its Oculus headsets. But what precisely is the metaverse? While there have been several conversations about metaverses and the future of Web 3.0, we may expect even more when events such as the next Metaverse Summit take place.

Warcraft, a massively multiplayer online role-playing game (MMORPG), is an excellent example of a metaverse, as evidenced by its permanent existence, independent instance, freedom, and interoperability. The word “metaverse” refers to an infinite and immersive digital universe of independent yet interconnected networks that will utilize yet-to-be-determined communication protocols. It enables permanent, decentralized, collaborative, and interoperable digital material to collide with real-time, geographically oriented, and indexed physical content.

Our virtual presence in the metaverse will be able to augment our physical presence. Instead of physically attending conferences, you might digitally follow them in the metaverse. You might be right there, experiencing history as if you were a participant in real time, rather than learning about it from a book. This progress is the most wonderful and amazing aspect of the metaverse.

To improve the user experience when traversing interactive 3D interfaces, the metaverse ecosystem—an alternative digital environment—will be offered predominantly through virtual reality. According to experts, this virtual sense of presence could be the trump card in attracting and retaining users. As a result, most of the innovative flare is anticipated here.

The metaverse will not only enhance current business models, but will also create new markets. Companies should expect a growth in the delivery of virtual services via a customer’s online presence (such as online meetings, medical appointments, concerts, and gym courses) as well as the offering of virtual objects to avatars.

Companies that work with digital platforms to market digital assets ranging from designer clothing to virtual real estate are projected to grow. Brand owners will be planning ahead of time how to utilize and defend their intellectual property. Because aspects of the metaverse’s creation will rely on creative technology (especially the usage of AI), patent protection and freedom to operate will be critical considerations.

Many academics believe that blockchain technology will be critical in building a safe and egalitarian metaverse. The blockchain is also helping to build a new metaverse economy, which is defined by artists’ ability to sell their work and be adequately compensated for their labor.

Non-fungible tokens, or NFTs, are an intriguing aspect of the metaverse because they enable users to sell everything from data to services and experiences while also benefitting the artist or creator behind each asset.

The advent of low-code and no-code platforms, as well as AI, will make it simpler for non-technical citizen creators to swiftly go from concept to execution, whether for consumer or business experiences, or to provide social or commercial value.

Gartner and others have a lot of data on business usage of these platforms, so this will very probably pick up speed, allowing a large number of people to build and sell digital assets in a very capital-efficient way.

Cybernetics, which covers anything from simple joysticks, headsets, and googles to more advanced features that erase boundaries between human sensory-motor systems and digital things and animals, is another significant driver of Metaverse interactions. We already have experimental brain-computer connections in the works.

Still, the emergence of cybernetics is the finest means to transfer an idea from our minds to machines and have the results returned to us, i.e., imagination to witness speedy execution and even an improvement over a low-code platform capable of scaling these cybernetic-driven rapid prototypes A diverse spectrum of enterprises are linking the physical and digital worlds.

VR and AR are examples of Extended Reality (XR).

The market for extended reality (XR) will be valued $393 billion by 2025. The term “XR” refers to immersive technology that includes virtual, augmented, and mixed reality. XR technologies like as cameras, microphones, and sensors are used to create a simulated world while still allowing you to interact with reality. The rising popularity of XR is one factor that will continue to change the metaverse.

Liminal environments, which integrate virtual and actual contacts, are making a buzz in areas like culture and art. As a result of XR, liminal zones will become increasingly noticeable at mixed or hybrid events and locations in the future, according to the report.

The Sandbox is an Ethereum-based decentralized metaverse that allows users to purchase land in the form of non-fungible tokens (NFTs) that they may customize and monetize. By buying many Lands, estates and even districts might be built.

Atari and the Bored Ape Yacht Club, among others, have already begun building on The Sandbox. Snoop Dogg, an American rapper, has just built a digital replica of his mansion in The Sandbox, where he plans to do live performances.

The Sandbox’s token is SAND, and with a $4.5 billion market valuation and a limited-time, play-to-earn alpha arriving on November 29th, this metaverse is one to watch in 2022.

Decentraland is an Ethereum-based metaverse comparable to The Sims or Second Life. The MANA currency is associated with Decentraland and may be used to make in-game transactions.

According to Decentraland, users may purchase NFT plots called LAND, which are 3333 virtual feet in size. A district can be formed by many conjoining landowners with similar interests, and an estate can be formed by combining pieces of property. Landowners can also rent out their land for specific events such as concerts. The most expensive LAND estate sold to date was $2.3 million.

Decentraland, which has a market capitalization of $5.6 billion, will be at the forefront of metaverse discussions in 2022.

Wilder World is older than the Sandbox and Decentraland metaverses. Wilder World is a photorealistic metaverse powered by Ethereum, Unreal Engine 5, and ZERO.tech. The Wilder World team is made up of seasoned 5D artists, including designers Frank Wilder and Chad Knight, who formerly worked for Nike and helped create breathtaking in-game imagery for the metaverse.

The first city created in the Wilder World metaverse is #Wiami, a 1:1 replica of Miami. According to Wilder World, Wiami, like Miami in real life, is projected to become the metaverse’s crypto metropolis. Wilder World is powered via way of means of the token $WILD, which may be used to buy NFTs along with wilder.kicks, wilder.wheels, and wilder.cribs. The value of NFTs is not limited to their look. NFT owners can utilise their items in-game or stake them for further benefits.

We are growing closer to the future, and many products and concepts that we once thought were only found in science fiction and fantasy literature are now slowly coming to reality as a result of ongoing innovation in numerous areas.

As the metaverse evolves, we are seeing a glimpse of a richer, more borderless world that is full of potential. However, as this new world grows, we must be aware of the new challenges that each new development brings. To make this new world a safer place, we must consider how we can address these issues while still making progress.