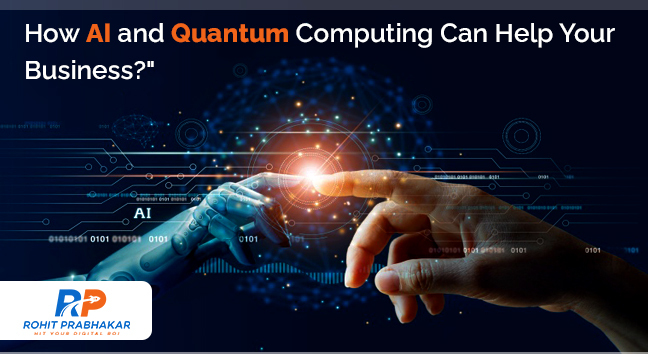 The rapidly developing field of quantum computing holds the potential to improve many business processes. By simultaneously testing several potential answers to problems, quantum computers and AI are poised to offer quick solutions to complicated business challenges. Quantum computers are based on the tiniest dimensions of nature, including molecules, atoms, and subatomic particles.

The primary building block of quantum computing is a unit of data called a “qubit,” which, unlike bits, which can only process the values zero or one, may take the form of anything in between and is referred to as a “superposition” to enable this novel method. Combining qubits allows for the simultaneous production of many different results. The search space doubles for every additional qubit, growing exponentially. Many firms are examining the Impact of Digitalization on Business and how quantum and AI may support many industries and offer new commercial use cases.

How does quantum computing work?

Using quantum mechanical concepts like quantum entanglement and superposition, this non-classical computational paradigm functions. Compared to classical computers, quantum computers can complete some jobs faster. Indeed, there is a mystery surrounding the quantum world. Unlike classical ones, they can store data as zero, one, or a superposition of the two.

NASA and the USRA, several IT behemoths, including IBM, Intel, Microsoft, and Google, have already begun to make significant financial investments in this area.

Our daily data output is 2.5 exabytes. That equates to the contents of 5 million computers or 250,000 Library of Congress. 3.2 billion internet users worldwide keep feeding the data banks with 9,722 pins on Pinterest, 347,222 tweets, 4.2 million Facebook likes, and All other data we make by taking videos and photos, saving files, opening profiles, and more.

A tremendous volume of data needs to be managed, and quantum computers are built to identify patterns and anomalies swiftly. Programmers are now better equipped to control the possibilities of quantum bits with each freshly released generation of quantum computer design and the latest advancements performed on the quantum error-correction code. To improve decision-making, the same is optimized for resolving all types of business difficulties.

Calculations carried out by quantum computers can be finished in a matter of seconds, but they would take current computers several years to accomplish. With the help of quantum computing, programmers can run several calculations with various inputs. Quantum computers are essential for processing the enormous amounts of data businesses produce daily. Quick calculations can be used to solve challenging problems. A concept known as quantum supremacy, where calculations typically take a quantum computer 10,000 years to complete, can be completed in 200 seconds. Translating business issues from the outside world into quantum language is essential.

Improvements in Business Insights and Models

Businesses are breaking their links to traditional computer methods due to the growing volume of data produced in sectors like banking, pharmaceutical, and life sciences. These businesses today need complex models with the processing power to simulate the most complicated scenarios to have a better data framework. Quantum computers are critical in this regard. The development of better models using quantum technology will improve therapeutic interventions for maladies in the healthcare sector, such as the COVID-19 epidemic examination process from testing to tracing and treating the virus. It can also lessen financial implosion in the banking sector and enhance the logistics system in the manufacturing industry.

Quantum computers are the finest tool for managing and integrating multiple sets of data from various sources, which speeds up the process and makes analysis more straightforward. Quantum computing is a suitable option for resolving business issues in multiple industries due to its ability to manage many stakes.

Parallel to this, as the infrastructure develops over the next five years, quantum software applications, developers’ tools, and the number of quantum developers and experts will increase. This will enable more businesses to benefit from the power of Digitization and Digitalization that comes with these two transformative technologies—quantum computing and AI—and encourage many higher education institutions to include quantum computing as a core subject in their curriculum content.