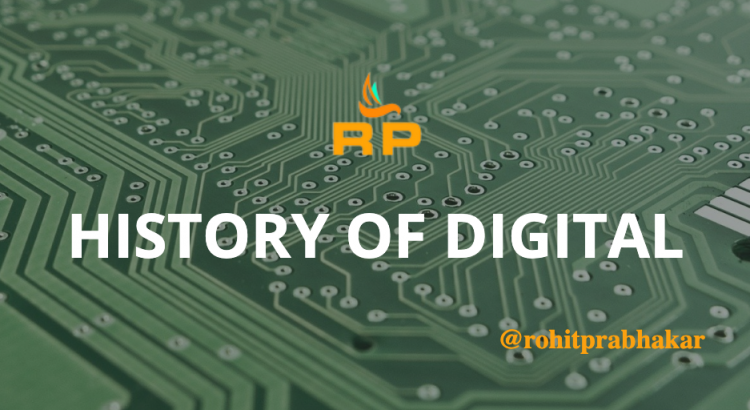 If you look around, you will see that every single aspect of our modern world runs on electronic devices. The core of everything is ones and zeroes nowadays, and the world is on a path of aggressive modernization and digitization. This was not the case for the last century. We have come a long way, and today, we will decipher the history of digital and the revolution it has created.

Ones and zeroes have become the building blocks of modern technological advancements. Moreover, digitization has led humanity to new heights of prosperity, progress, and success. From landing on the moon to creating social media platforms for billions, digitization plays a vital role in every aspect of human lives.

From smartphones to personal computers, from tablets to gaming consoles, everything runs on ones and zeroes. However, this was not always the case. Let’s take an in-depth look into the history of the digital era.

Yes. The birth of the digital era took place in 1703 when mathematician Gottfried Wilhelm Leibniz developed the modern binary number system and published it under the name “Explication de l’Arithmétique Binaire.”

In the year 1847, Boolean algebra was born when George Boole published “The Mathematical Analysis of Logic.” The book would later become the foundation for a new field of mathematical logic using the modern binary number system. In his words, “The respective interpretation of the symbols 0 and 1 in the system of logic are Nothing and Universe.”

In 1937, Claude Shannon established the foundation for digital circuits in his Master’s thesis at MIT. He came up with a method of implementing Boolean algebra and logic to enhance the design of relays used for routing switches in telephones.

In 1947, John Bardeen, Walter Brattain, and William Shockley invented the first transistor at Bell laboratories, which changed the course of history forever and opened a new window to the digital future. This was among the most important inventions of the century. This semi-conductor device replaced the giant vacuum tubes and offered a simpler way of amplifying or switching electric signals.

In the year 1950, the very first series of pagers were introduced for physicians in New York City. Pagers showed a new mode of communication with the help of wireless telecommunications devices. These pagers could receive a message within 40 kilometers of the nearest transmitter tower.

In the following year, 1951, the first commercially available computer, Britain’s Ferranti Mark I, was delivered to Manchester University. This computer was created for simple arithmetic and data handling. Several other companies released their versions of general-purpose computers, such as UNIVAC, EDVAC, and LEO, etc.

In 1969, the precursor to modern-day internet was born, and it was named ARPANET (Advanced Research Projects Agency Network). The first message that was transmitted via ARPANET was “LO.” A student, Charles Kline, tried to send the word “LOGIN” to the other computer, but after LO, the receiver crashed.

The very first email was sent out by computer engineer Ray Tomlinson to himself in 1971, and it read “QWERTYUIOP.” This laid the foundation for the modern email and data exchange protocols observed by the majority of email providers.

1975 saw the invention of TELENET, the world’s first commercial packet-switched network. This was the first version of the internet, and it connected company computers to other systems all over the world.

In 1984, the very first mobile phone was launched for 4,000 USD. It offered only 30 minutes of use after a 10 hours’ charge. However, it laid the foundation for modern cellular and smartphones.

Thanks to Tim Berners-Lee, in 1989, the “world wide web” was invented and thus born the modern internet. He was working at CERN at the time, and he created the system to facilitate the automated information-sharing among different scientists.

In the following year, 1992, dial-up internet and modems became public, and everyone was introduced to the joy on the internet. We all remember the era of unplugging phone lines to use the internet on our personal computers.

In 1994, the very first smartphone was introduced to the public, and it allowed the ability to place calls, send a fax, retrieve emails, and send text messages to others. It was known as IBM Simon Personal Communicator, and the battery only lasted an hour.

In the year 2000, Broadband was introduced in the UK, and a new form of internet connection was introduced. People quickly started replacing their dial-up modems for Broadband modems.

In the year 2003, Skype was launched. This was the very first medium of video conferencing and communication between people. It quickly became popular, and there was now a new medium of communication.

Facebook was launched in 2004 and became the number one social media platform for years to come. It gave birth to a new age of social media communications and earned millions of users within a few years of inception.

Did you know that the first iPhone was launched in 2007? The first iPhone also resulted in a sudden and an immense surge in the usage of smartphones. It sold over 6.1 million units all over the world and established Apple as the best brand for smartphones for a while.

In 2011, Bitcoin made history by becoming the first widely accepted fully digital currency. When Bitcoin focused on modern encryption technologies to offer a form of wireless currency, it became all the rage, and people started investing in Bitcoins.

We live in an age of 4G (soon to be 5G) networks where we can watch or access anything from all over the world within a matter of milliseconds. Everything is available on the internet nowadays, and you can communicate with your loved ones from thousands of miles away.

From a mere email conversation to significant business decisions, everything is done via digital mediums. It all began with a binary number system, and the modern digital advancements are not showing any signs of slowing down for decades.